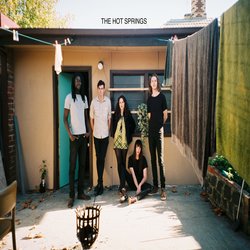 After meeting on the Melbourne gig circuit, Knight and Heath formed the beginnings of what would become the band, writing and recording at a studio in Melbourne’s North. Over time they were joined by Louis Majiwa (Heath had played guitar and bass for Louis’ solo project, MAJIWA) Cassie Kumaschow (previously of ska group Morbidly O’beat) and Renn Picard (also of folk-rock 11 piece, The Northern Folk);

‘Louis and Renn came into the band through meeting at gigs. And then in 2017 we put a personals ad out as a joke looking for a drummer. It said something like - athletic band seeks drummer for good times and gigs etc - and we met Cass in a garage in Brunswick one afternoon. It was good straight off the bat.’


Shock & Happiness was formed in the studio where Knight used the writing space to collage words from a book of Robert Burns’ poetry found in a Wonthaggi opshop. The song, which touches on feelings of freedom and desperation, constantly builds climaxing with a soaring Saxophone solo.

Other tracks by The Hot Springs: Winterbell  -  Appaloosa
%