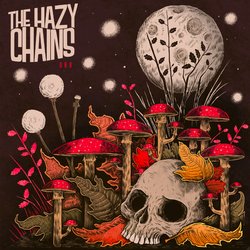 Sydney-bred neo-psychedelia band, The Hazy Chains release their debut EP ‘Orb’ on June 5, 2015 following on from the release of the lead single “Feeling Me”.

The Hazy Chains reflect upon their journey so far. Kait Hudson and Father Yod banded together in 2013 in the form of Sydney grunge outfit Pulse Mavens. Over the course of a year they released an EP “Fight Back”, raised $5000 for emergency women’s services in Sydney. Supported US bands Hawthorne Heights, The Red Jumpsuit Apparatus and Forever Came Calling. Front woman Kait Hudson was then selected from 2000 applicants across Australia to be a recipient of the AMP Tomorrow Fund, where Kait and Yod were introduced by Wendy Harmer to perform at The Town Hall and receive a trophy plus a hefty grant which in turn funded the The Hazy Chains EP release “Orb”.

Drawing new inspiration from old influences as varied as Janis Joplin and Nine Inch Nails, the song writing duo wrote “Orb” The EP was recorded in Brisbane at “The Shed” with ARIA nominated and Gold Award Winning producer Bryce Moorhead (Violent Soho) over three weeks. The talented duo played all instruments on the EP.


'Feeling Me' is the lead single from The Hazy Chains Debut EP 'Orb' Feeling Me was written about how ego and crippling self doubt can co-exist in the same being. A strange dichotomy.

Other tracks by The Hazy Chains: Orb  -  Sinking