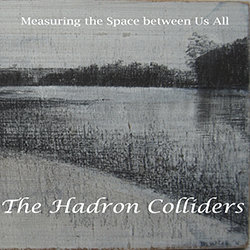 The Hadron Colliders, formed by Arun Kendall (vocals, guitars) and Shannon Lewis (keyboards), play all original music influenced by the bands they love, including The Cure, The Church, The Jesus and Mary Chain, REM and The Go-Betweens.

The current line-up was completed with the addition of bass player, Cameron McWilliams and drummer, Mark Duncan in early 2014. The songs are strong on melody, placing equal importance on lyrics and layered instrumentation. Live, the band has played at iconic Sydney venues, including the Annandale Hotel and the Petersham Bowling Club.

The band will be releasing their debut EP “Measuring the Space between Us All” in November 2014 through Sydney label Interstellar Records. Covering themes of isolation, travel, exploration, fleeting and distant connections, the EP reflects on an unsettled ever-changing world and delivers a melodic, shimmering sound that typifies The Hadron Colliders.

The lead single is “Bellwether”, an ode to the city of London, with a theme of alienation and desire in one of the world’s most vibrant cities.

The name of the band evokes a world of mystery and exploration: referencing one of science’s greatest experiments, the Large Hadron Collider in Switzerland designed to discover the building blocks of the universe.


A more laid back tune with some very tasteful guitar textures and a corresponding vocal feel.

Other tracks by The Hadron Colliders: Bellwether  -  Cherry Blossom Girl
%