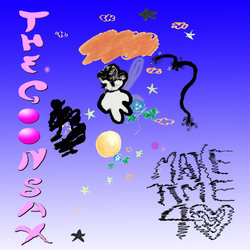 Brisbane, Australia trio The Goon Sax were still in high school when they made their first album Up To Anything in 2016. Their transcendent teenage guitar pop took them into end of year lists for Billboard, BBC6 and Rough Trade, and earned raves from Pitchfork, Spin and Rolling Stone.
The Goon Sax toured UK and Europe twice, playing shows with Whitney, US Girls and Teenage Fanclub, then turned their focus to album number two.
We're Not Talking shows how much can change between the ages of 17 and 19. It takes the enthusiasms of youth and twists them into darker, more sophisticated shapes. Relationships are now laced with hesitation, remorse, misunderstanding and ultimately compassion.
Strings, horns and castanets sneak onto the album, but We're Not Talking isn't glossy throwaway pop. Sounds stick out at surprising angles and home-recorded fragments appear unexpectedly. Drummer Riley Jones also comes to the fore, singing lead and writing songs for the first time. This is a record made by restless artists, and its complexity makes We're Not Talking even more of a marvel.
Since recording the album, the band have played shows with Angel Olsen, Perfume Genius and Protomartyr, and toured UK/Europe with Frankie Cosmos.


The Goon Sax's Louis Forster: 'Make Time 4 Love is about learning to live with yourself and accepting that everyone's impulses seem irrational to someone else. It's about realising love is at odds with the rest of your life and admitting defeat. We were listening to ESG and Liquid Liquid around the time, so it ended up kind of dancy!'