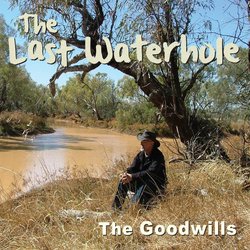 The Goodwills (Bob & Laurel Wilson) have become known to a wide audience through radio play of Bob’s original material. Songs like “Big Country Town”, “Underneath the Story Bridge” and “Courting the Net” have been included on ABC compilation CDs, including Macca's Top 100.
The duo has produced four CDs since 2000, mainly featuring material by Bob, an award-winning songwriter who plays six-string and 12-string guitar and harmonicas. He provides tenor harmonies to Laurel’s strong lead vocals and also takes the lead on some of his songs. Laurel’s wide vocal range allows the duo to explore a variety of melodies and harmonies.
Bob's latest batch of songs on the 2015 album, "The Last Waterhole", feature distinctly Australian songs ranging from a zany tune about a 100-year-old Morris dancer and a satirical nod to blokes named Paul, to poignant ballads about immigration and refugees, and whether one should burn Father's letters.
The Goodwills have played at major festivals in Australia, New Zealand and the UK and toured with Australia all Over host Ian McNamara and band.
The Goodwills are also known for promoting unplugged house concerts in their home town, featuring well known guests and a set from the "house band".


A family faced with boxes of letters penned by their late father ponder what to do with the correspondence. An interwoven narrative tells of Charles Dickens's instructions that a giant bonfire be built to destroy his personal papers , before the song returns to the refrain.

Other tracks by The Goodwills: The Last Waterhole  -  Buddy's Gone to Conondale
%