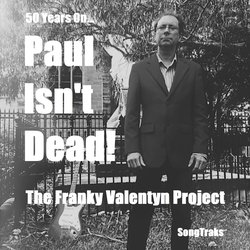 In addition to averaging over 250 live performances a year, as a solo performer, part of The Franky Valentyn Project, half of the Franky & Wendy duo, as well as performing regular guest spots in other bands, Franky Valentyn has also;
- arranged & produced albums for local artists
- performed in many of Sydney's iconic cover bands,
- played and/or had his music performed at major
sporting events, TV shows (Inc ABCs Play School) and on London's West End! Download Now!

As The Franky Valentyn Project, his releases have received amazing critical acclaim both here and overseas with album reviews in SMH, PROG & Blurt Magazines.

His previous albums 'All In A Dream' and 'Life As We Know It' as well as his one off singles have been described as 'absolutely stunning masterpieces' with his last release 'The Party (has just begun)' landing in the AMRAP Top 10!.

Overall the Projects music has received tremendous response and support from fans & the Community Radio Network across Australia.

Previous single releases include; Breaking Out, Hope for Llewella, tHanks for the Summer*, Gothic Horror & Sara


On the 50th anniversary of the release of The Beatles 'Abbey Road', The Franky Valentyn Project takes a tongue in cheek look at the events surrounding the 'Paul Is Dead' mythology with the track 'Paul Isn't Dead' 50th remix!