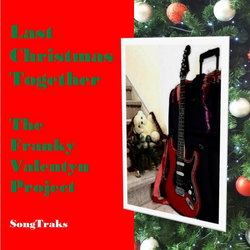 In addition to averaging over 250 live performances a year, as a solo performer, part of the Project, half of the Franky & Wendy duo, as well as regular guest spots in other bands, Franky Valentyn has also;
- arranged & produced albums for local artists
(inc Ellie Miels latest release 'Kiss Me'),
- performed in Sydneys iconic cover bands,
- played and/or had his music performed at major
sporting events, TV shows (Inc ABCs Play School)
and London's West End!

As The Franky Valentyn Project, his releases have received amazing critical acclaim both here and overseas with album reviews in SMH, PROG & Blurt Magazines.

His previous album 'All In A Dream' was described as an 'absolutely stunning masterpiece' whilst his latest album 'Life As We Know It' is already generating a 'must have' buzz in the Industry.

Overall the Projects music has received tremendous response and support from fans & the Community Radio Network across Australia.


Last Christmas Together, is the sad but true story of having to come to grips with the decision to leave everything in your world behind you and to do it on Christmas Eve!

A hard choice involving, not only giving up your life as you know it, but also your loving partner and beautiful daughter, just as Christmas is dawning!


Other tracks by The Franky Valentyn Project: The Party (has just begun)
%