The Even Stevens - Tape Recorder 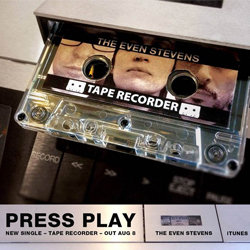 Is this the future of garage rock?

The Even Stevens is the culmination of two of Melbourne, Australia’s premiere DIY home recordists who have joined forces.

Jamie Coghill (The Jimmy C, The Devilrock Four, Fez Perez, Luxedo) on vocals and drums spends most of his spare time in his home studio with his alter-ego The Jimmy C knocking out album after album of long lost classics destined to be discovered in a far out future. He plays everything. He writes everything. He sings everything. His genius will one day be discovered.

Gerard Daley (The Stuntcar Drivers, Delta House, The Wildflowers) is the other mastermind behind the band. Singing and playing the rock’n’roll guitar with The Even Stevens, he normally spends his spare time in his ‘Kitchen Sink Studio’.

After a Redd Kross rock show in 2013, he asked Jo Ward aka "Status Jo" (The Boyettes, The Flirts) if she would bring her bass out of retirement and complete the gang. Status Jo obliged, and The Even Stevens were formed.

These days, technology has made it possible for garage bands to exist outside the galvanised walls, and The Evens Stevens have turned this possibility into a reality.


A full on anthemic alt rock track - you can hear the backstage Melbourne pub venue studio vibe oozing out of every note of this track and yes it really was recorded on a classic two inch tape machine! Fun and exciting and sure to get the kids rockin'.