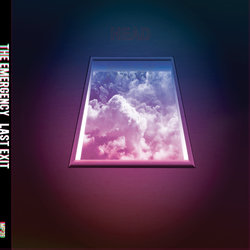 The Emergency are a three-piece synth and drum band from Melbourne. Their third album Last Exit sees them leave the world of cosmic disco behind to explore the heavily dubbed out atmospheres beyond. Like their previous releases, it blends pop hooks and melodies with left-field production.

Last Exit sees Cinta Masters (Useless Children, Gold Tango) join Milo Kossowski (synth, vocals) and Morgan McWaters (synth, production), playing a drum kit hooked up to a custom programmed synthesizer that lets the drums play the synth in place of a keyboard. The result is sequenced synth lines that match the ebb and flow of the drumming rather than drumming which is forced to stick to a rigid programmed tempo. This allowed the band to form songs by experimenting in the rehearsal studio rather than writing on a computer or preprogramming sequencers. They call it the Cintasizer.2012 also sees The Emergency playing their first US shows, including the Sometimes A Great Notion festival in Portland Oregon alongside Peaking Lights. Their first international shows since headlining the 2009 Hanoi International Music Festival.


Afterlife is the first single off the Emergency's third album. Available as a download only