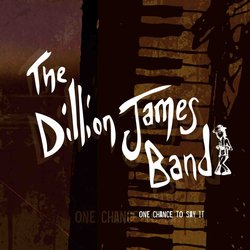 The Dillion James Band is a collective of musicians that jam, perform and record with the man himself. Hailing from the luscious tablelands of Far North Queensland, and inspired by his travels across the globe, in particular a stint in New Orleans, Dillion's Hammond “…leads the groove and breathes the blues” while the accompanying musicians envelop the vibe with reggae and funk overtones giving rise to an infectious performance.

The bands brand new reggae inspired EP "One Chance To Say It" captures the big stage sound that collates around Dillion's talent, positivity and love of music.

The five tracks have been recorded in the world class American Girl studios at Burleigh Heads, with Toby Baron who also plays drums for the band. Well respected sound engineer, Beachy Wild doubles as bass player and producer, while the well traveled Norman Baquiran layers guitar and vocals with a wealth of experience from extensive of tours the Asia-Pacific cultural melting pot. The band is rounded of by jazz specialist and saxophone soloist Alex Fletcher. The recordings feature a plethora of guest artists including Bobby Alu, Sian Evans, Brodie Graham, Tashka Urban, Arig Issack, Taya Walsh, and David Turpin.


A tantalising taste of sound of The Dillion James Band's sophomore release - "One Chance To Say". Blood Brother was originally recorded for the bands debut release "Tone Baked Goodness (2011), and has been remixed with fresh vocals and buffed with production polish.

Other tracks by The Dillion James Band: $haped Itch  -  Sidewalk
%