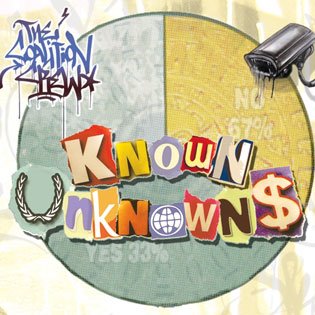 The core of the outfit, MC/producer Yuin Huzami, producer Toxic Al, and DJ Nikk C, come from
an eclectic musical upbringing; enlightened by the social
consciousness of groups like Public Enemy and KRS One and by the pop glare of trendsetter Bjork
and deep introspection of Elliott Smith, their collective influences form a bond both moving and
soulful, tackling musical sounds that range from the roots of hip hop to jazz, to rock, to soul.
Already pioneers of the Brisbane scene through the formation and promotion of their own
record label, United Notions, and having shared the biggest stages (including the Big Day Out) with
luminaries The Herd, Bliss N’ Eso, Hilltop Hoods, and Sage Francis, the Coalition Crew embark on
their most ambitious trek yet; the 2-disc full length album, Known Unknowns. Years in the making
and a grand, socially aware effort, Known Unknowns is the outfit’s defining statement; an overture of
the trio’s musical consciousness meant to question the answers and lift the human spirit.
Featuring guest appearances from Masta Ace, Lazy Grey, and Wordsworth, Obese Records proudly presents Known Unknowns.


The first single from the 2-disc album- a homage to the good times and positive vibes of Australian hip hop.

Other tracks by The Coalition Crew: Another Day In The Life
%