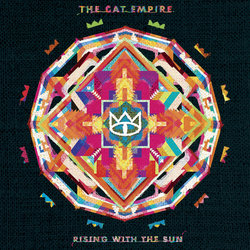 Formed in 1999, The Cat Empire from Melbourne have become one of Australia's most successful bands. With constant touring and recording, they have amassed a following that is truly global.

'Rising With The Sun' (their 6th studio album) was recorded in their home town of Melbourne, with producer Jan Skubiszewski. “There's a lot of celebration on ‘Rising With The Sun’,” mentions lead vocalist Felix Riebl, “in terms of ‘celebrating’ what the Cat Empire is, and what it means to people to come to the shows and be a part of that.”

The songs on ‘Rising With The Sun’ are ready made for the stage and will only enhance The Cat Empire’s already legendary live show. Felix makes no secret about what the intention is for these songs. “You can play it on a big stage. The choruses are ones people can sing. The rhythms really work.”

The Cat Empire have performed over 1100 shows. In 2015 they performed sold out headline show at London's iconic Royal Albert Hall, just one week after performing one of the final shows at the venue where they started it all, Bennetts Lane Jazz Club in Melbourne.


'Bulls' is the new single from the band's 'Rising With The Sun' album (Rel, 4 March 2016). Part of the melody from the song came to frontman and writer Felix Riebl in a dream. Towards the end of the song the band really kick up a gear. PARTY!