The Cactus Channel & Sam Cromack - Do It For Nothing 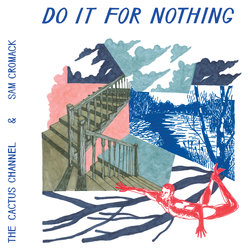 The Cactus Channel formed in high school, united by shared interests and a shared sense of humour — a love of soul music and the kind of hip hop, jazz, and alternative releases that spring from it, meant that from the beginning The Cactus Channel have prided themselves not just on eclecticism, but on the constant sharing of influences among their members.

By 2015 the band had two albums, and national tours under their belts when they were approached by Nick Murphy (FKA Chet Faker) to collaborate on one-off release Kill The Doubt/Sleeping Alone. The band’s first recorded foray into working with a vocalist, it proved yet another avenue for the band to introduce diverse sonic textures into their arrangements. This year they have collaborated closely with Sam Cromack on an EP that treads a thin line between alt-soul and the best of indie pop, swimming in compelling atmospherics and deftly weaving Cromack’s rich, drawling vocal and disarming, meditative lyrics through the band’s typically intuitive arrangements.

Solidifying their lineup of seven members, The Cactus Channel’s music will undoubtedly continue to shift and change, as action-reaction proves the perfect formula to keep the band, and their listeners, on their toes.


Do It For Nothing, also the title of the EP, is the lip biting R&B flavoured track on the release. The long form verses build to a climax in the chorus, complimenting Sam's super melodic and earworm melody. Slow dance floor banger.