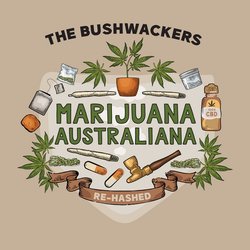 The Bushwackers are Australia’s best-known, best-loved bush band. In 2020, they celebrate 49 years of performance. There’s been more than 100 members, 25 studio albums (26th to come in 2020), four books, tours, awards and enough stories to fill a dozen books.

The Bushwackers play proudly Australian music, much of it based on the traditional folk and working songs from the early 20th century but have seamlessly incorporated Celtic instrumentals and great contemporary originals.

The Bushwackers continue to take their unique brand throughout the country and around the world bringing their spirit and energy to festivals, clubs, pubs, schools and events.

Their bush dances in the late 70s and 80s had thousands of people doing the Heel and Toe and Strip the Willow and there’s scarcely a school kid who didn’t learn a bit of bushdancing to the music of The Bushwackers.

The Bushwackers are led by the mighty Lagerphone of Dobe Newton and he’s joined onstage with a great team of musicians wielding fiddles, accordions, mandolins, guitars, bass, and drums.

Their shows are filled with enthusiastic old and newer fans who dance, sing and enjoy this unique Australian, iconic band.


The Bushwackers first released Marijuana Australiana in 1981 as an anarchic piece about the recreational drug which was frequently smoked at the time. Attitudes have changed, so Roger Corbett, Dobe Newton and Allan Caswell rewrote Marijuana Australiana (Rehashed) to reflect the current political/pharma climate and built on the existing song written by Brendan Hanley (who passed away in 2018).