The Bushwackers - Leave It In The Ground 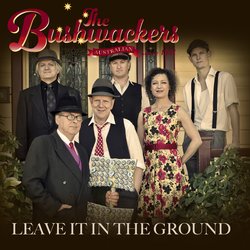 The Bushwackers are Australia’s best-known, best-loved bush band. In 2016 The Bushwackers will celebrate 45 years of performance. There’s been 75 members, 20 studio albums, four books, tours, awards and enough stories to fill a dozen books.

The Bushwackers play Australian music, much of it based on the traditional working songs from the early 20th century but have seamlessly incorporated Celtic instrumentals and great contemporary original songs like Beneath The Southern Cross, Henry’s Men and I Am Australian.

The Bushwackers have taken their unique brand throughout the country and around the world bringing their spirit and energy to Festivals, clubs, pubs, schools and events.

Their Bushdances in the late 70’s and 80’s had thousands of people doing the Heel and Toe and Strip the Willow and there’s scarcely a schoolkid who didn’t learn a bit of bushdancing to the music of The Bushwackers.

The Bushwackers are led by the mighty Lagerphone of Dobe Newton and he’s joined onstage with a great team of musicians wielding fiddles, accordions, mandolins, guitars, bass, and drums.


Leave it In The Ground speaks unashamedly against coal seam gas exploration, fracking and the wanton destruction of our countryside. Leave It In The Ground is an anthem for the communities fighting for the rights of the farmers.