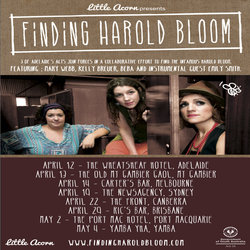 “…you could hear why she has been compared to Missy Higgins, … My ‘plus one’ reckoned Kelly was better!” – Fringe Benefits , 2012

The Brouhaha (aka. Adelaide’s Kelly Breuer) has spent the last 18 months paving her way through the East Coast of Australia. Along with Margo the Tarago and a swag of varying musical guests, the feelgood folk singer has had quite the year.
“...Bright, bubbly and exploding with personality, Kelly Breuer is a charming and talented young lady, determined to bring a smile to the face of all who come into contact with her. And she’s succeeding everystep of the way!” - Fringe Benefits , 2012
Her debut EP “Smile, it’s Free” was released last August and quickly became a community radio hit with the single “Smile it’s Free” airing at #3 on the AMRAP charts and the b-side “Good People” finding some Triple J love.
With invitations to play The Adelaide International Guitar Festival, Feast Festival, Newstead Live and The Yackandandah Folk Festival as well as winning a place in The Telstra Road to Discovery Competition, Kelly is currently working on a new album (for release in 2014) and a second year of hefty touring.

Other tracks by The Brouhaha: As long as there's a smile
%