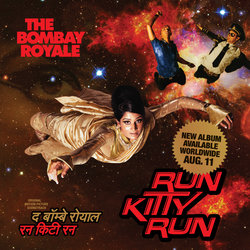 The Bombay Royale are a world conquering cult band hailing from Melbourne Australia. Their music is a red hot masala of surf, spy, space disco and funk inspired by the sounds and spirit of 1970s & 80s Bollywood, led by The Skipper and overlaid with the voices of protagonists The Tiger and The Mysterious Lady singing in Hindi, Bengali and English.

From unlikely beginnings in the badlands of suburban Melbourne the band have taken their unique sound to audiences throughout Europe, UK and the USA. Their debut album ‘You Me Bullets Love’ won a place in iTunes Best of 2012 and hit #1 on the iTunes World Music charts in the USA. In 2014, the band unleashed its trademark sound yet again on the extraordinary musical safari that is their second album, ‘The Island of Dr Electrico.’ Their music has been licensed in films, the Far Cry video game franchise and TV shows, including the single Henna Henna which was featured on AMC’ s ‘Better Call Saul’.


'Ballygunge' has an angular 80's vibe, infused with gated snares and the spirits of Talking Heads and David Bowie It's a love song set in a dark sci-fi vision of Kolkata. Familiar landmarks like Gol Park are dwarfed by aerial highways and transmitter towers framed by plumes of departing spacecraft.

Other tracks by The Bombay Royale: I Love You Love You
%