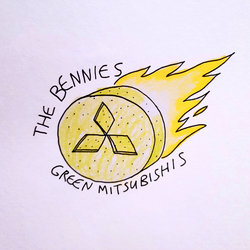 Making their return to Europe this August, The Bennies will play a handful of festivals alongside some of their favourite bands, including Punk Rock Holiday in Solvenia & Brakrock Festival in Belgium. The rest of the tour will see The Bennies headlining shows around England, Germany & Switzerland.

Starting this weekend in Albury is the Punk Rockin The Suburbs Tour, a ten-date regional & suburban tour which will see The Bennies playing towns across New South Wales, Victoria and South Australia.

Vocalist Anty calls the song a ballad - “It is a ballad about the disco before the breakdown, claustrophobia in sweaty nightclubs, prioritising time with friends over everything else, it is about the heights of ecstasy, it is about finding family in friendship, but most importantly it is a song that attempts to recreate the overly serotonin fuelled moments where the world feels like it is yours and you are capable of anything and everything, despite all your insecurities and barriers. You got me loving life."


'Green Mitsubishis' is a bit different to your typical Bennies track, but not any less of a party starter than you’d expect. It's the second single The Bennies have released in 2019, following ‘Waiting For Dave’. The two songs are the first released as a 5 piece band and their first new music since 2018 album Natural Born Chillers.