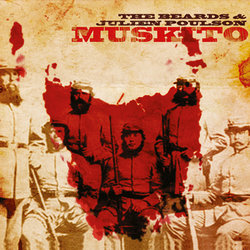 Hobart native Julien Poulson began writing Muskito while living in Italy on an Italy Artist Residency awarded by the Alcorso Foundation.
Muskito is soundtrack collaboration between The Beards (Venice, Italy), Julien Poulson (Tasmania) and Aaron "Professor Louie" Hurtwitz (USA). Poulson's initiative to bring together musicians of different cultures and backgrounds to record this concept album has produced stunning results. The musicians bring to the table their individual influences, at times there's flavours clearly influenced by classic Australian bands like The Birthday Party through to The Drones, while The Beards chime in with their distinctly Veneto voices and offer up hints of Italian opera, indeed at times, Massimiliano Magro's voice sounds like a strange cross-breed of Luciano Pavarotti and Johnny Cash - little wonder Rick Rubin is a fan! of this album.
Finally, with the trusty hands and fingers of Professor Louie, a piano player and record producer steeped in Americana sounds not least through his renown as a great musician but for his studio work producing no less than 3 albums by The Band as well as contemporaries such as Mercury Rev, Muskito cooks up all these ingredients into an unlikely but extraordinary banquet of song.