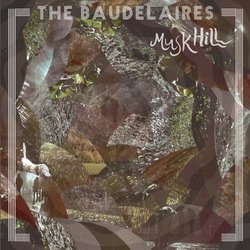 Musk Hill is the upcoming debut full-length from Melbourne's The Baudelaires. Stomping through the dreamy, substance-induced house-party haze of their previous EP Be a Baudelaire! (2014), the new album delves into the crunchin' boogie of psych-garage territory. Recorded over 3 days on a property of the same name on the Mornington Peninsula, Musk Hill was mixed by Baudelaire's own Grischa Zahren and mastered by Melbourne music legend Mikey Young.

Having toured South Australia, Queensland and New South Wales on several occasions, been invited to play such festivals as Chopped Rod and Custom, Happy Wanderer, Rolling Stone Live Lodge and shared the stage with the likes of Cosmic Psychos, Cash Savage and the Last Drinks, King Salami and the Cumberland 3 (UK), Peep Tempel and more, The Baudelaires are eager for their album's release and to hit the road again.

The Baudelaires will be dropping Musk Hill on November 4th through Off The Hip and their own Colourtone Records, with a run of New South Wales dates to follow.


Two singles will be released simultaneously in accordance with the release of Musk Hill: the thumping 'Bomber Dan', as well as the loaded slow-burning album closer Dweller, which will include a mind-altering film clip created by Tobias Willis.

Other tracks by The Baudelaires: Dweller