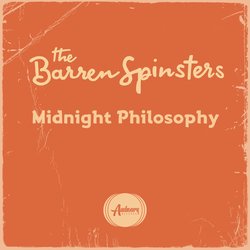 They look like a two-piece, sound like a five piece, and move like a hair piece. Front man Brendon Houlahan plays guitar with his hands, bass with his feet, and sings with his face. Matt Tennant belts the drums really hard, sings a little bit, and wears really dumb shirts while doing it. Together, The Barren Spinsters deliver 70s blues rock with a modern thrashy twist. Much the same way that Wolfmother doesn’t.