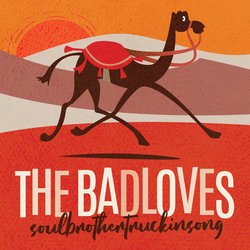 The Badloves released just two studio albums before taking some time out.

Their debut album “Get On Board” spent a massive 69 weeks in the charts , peaked at number 5 and went double platinum; delivering 5 hit singles in, “Lost”, “Memphis”, “I Remember”, “The Weight” (w Jimmy Barnes), “Memphis” and “Green Limousine”.

After extensive tours in Australia and Europe, the band released their second album in 1995, "Holy Roadside" to critical acclaim, further ARIA nominations, and another string of hit singles in “Slave”, “Barefoot Bride”, “Living Thing” and “Caroline”, establishing them as one of this country’s premier acts.

Soulbrothertruckinsong is the first new release from the band in almost 20 years. The band is currently in the studio working on tracks for an album release mid 2020.


Featuring the Badloves signature retro sound of singer Michael Spiby's soulful vocals over Hammond organ and multi layers of guitar, percussion and vocals all moving along with a mid temp pulsing beat.