Amrap's AirIt | Australian Music Radio Airplay Project :: Folk :: The Awesome - In the Beginning Was The End

The Awesome - In the Beginning Was The End 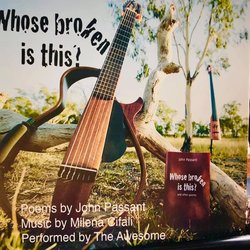 Two of Australia’s creative talents forces collaborate on a unique album, “Whose Broken Is This?”

Poet John Passant, currently receiving treatment for cancer, has collaborated with acclaimed singer/songwriter Milena Cifali who has set John’s poetry to music. The poems are from John’s published volume Whose Broken Is This (Ginninderra Press 2018) .

Classically-trained Milena, a guitarist of rare talent, enchants audiences with her intricate style fusing elements of John Butler, Rodriguez and Michael Hedges. Jim Horvath, playing distinctive upright bass, is also a talented percussionist with a flair for African/Latin rhythms, having learnt his craft from the legendary Stui Spears of Max Merritt and the Meteors. Other artists on the recording are award-winning Dorothy DJ Gosper, and Tony Hunter (mandolin) from Canberra.

Milena is honoured to have been selected to craft the poems into songs, saying: “John’s poetry is a vital body of work for Australian poetry. The poems stir the dust in your soul, remaining there long after the dust has settled”.

Other tracks by The Awesome: These Broken Waters Of The Truth  -  And So You Sleep
%