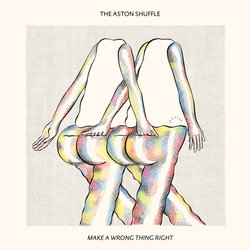 The Australian duo—Vance Musgrove and Mikah Freeman—have been making music together for a decade, and in this time have established themselves as forerunners of the Australian scene. Equally skilled as producers, remixers, selectors, and mentors, the guys have forged an ever-growing presence on the world stage since meeting in their native Canberra.

The duo rose to prominence on the power of their standout remixes, and quickly became regulars on the famed Ministry of Sound compilations.

Following the release of Only 1 featuring Nathaniel S. Lewis, the Aston Shuffle created the instrumental for Make A Wrong Thing Right between Canberra and New York, collaborating with composer and vocalist Micah Powell, whose relentless songwriting has landed his album placements for world renowned artists, Drake, Jhene Aiko and Chris Brown- as well as collaborations with Jamie Foxx, Paul Oakenfold, Pitbull, Ray J and Marques Houston.

Make A Wrong Thing Right premiered with Danny Howard on Pete Tong’s Essential Selection show on BBC Radio1 (Friday 1st of July), and featured as the opening track on electronic-lord The Magician’s Magic Tapes series, and has since received over 100k plays in 4 days on soundcloud and ranked #2 Most Watched ID on influential DJ/artist database, 1001tracklists.com.


Make A Wrong Thing Right released via The Magician’s club imprint Potion, featuring US vocalist Micah Powell highlights the duo’s creative innovation and fortified production techniques, revealing facets of its seasoned worldliness and is a unique tribute to the evolution of electronic music connecting with dancefloor aficionados around the globe.