The April Family - One Trick Pony 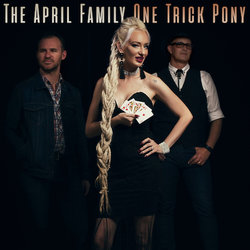 Featuring the soulful twang of the enigmatic Kylie Whitney on lead vocals, the blistering skills of Casey Atkins on lead guitar and backing vocals, and the production and all-rounder abilities of Michael Carpenter on rhythm guitar and backing vocals, The April Family developed a sound that fused Classic Country with the timeless colours of West Coast American Country Rock.

The result was their debut album “What We Know Now”, released in May 2017. Featuring 4 well received singles, the album allowed the band to develop a compelling live show, based around accomplished musicianship, tight 3-part harmonies and the presence of front person Whitney.

The live performing experience has further defined the band’s sound, leading to the writing and recording of their second album, due for release soon. With a focus on a leaner approach, showcasing a more ‘ensemble’ sound, and the writing from Carpenter and Whitney becoming more refined and deliberate, the album promises to show a maturity and intent that will lift the band to the next stage of their journey in the Australian Country Music scene.


One Trick Pony features the soulfully twangy vocals of inimitable lead vocalist Kylie Whitney, the blistering lead guitar work of Casey Atkins and the insistent grooves and gritty production of Michael Carpenter, and was written by Whitney and Carpenter. The pointed lyrics support the narrative in the vocal, punctuated by production that seethes while building through to an explosive bridge.