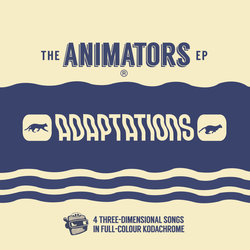 Becoming a live band in 2009 when Dave Cutherbertson was discovered by filmmaker Beau Miles on MySpace, The Animators first shows were for premieres of documentary Africa by Kayak – sold out 600-strong events in Melbourne, Sydney and Brisbane.

Their intense live show got them festival slots at St Kilda Fest, Peats Ridge Festival and The Gum Ball within months, and with mini-album The Old Dog [2010], The Animators built a Melbourne audience, supporting Big Scary and Bonjah, and playing The Hills Are Alive. Their 2012 release [Dualis] saw single ‘Shiver’ rotate on Triple M, with the clip named ‘Indie of the Week’ on Rage. A stand out performance at RAW Festival finished their year before Dave headed to Sydney to write Adaptations.

Recording with long-time guitarist/bassist Simon “Subb” Michalski, after arranging Dave’s “horribly articulated demo”, the pair agreed the songs were now “adaptations” of the originals, and were thrilled when drummer Michael Di Cecco locked in immediately recording his drum parts live.

A dynamic triangle of unreserved use and abuse of piano, drums, guitars, synths and fuzzy bass, The Animators have created in Adaptations a cathartic and coded suite, the closest recreation yet of their turbulent, eye-brow-raising live show.


About being in a new environment and feeling a bit overwhelmed, 'Alien' could well be the perfect summation of The Animators career trajectory. They never seem to see it coming.