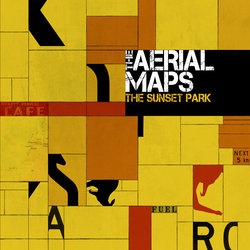 Two years and many hundreds of kilometres in the making, The Sunset Park is the new album from Australian band The Aerial Maps. The follow-up to the band's acclaimed debut album In the Blinding Sunlight, The Sunset Park is the sound of a band forging a new path, taking little heed of convention and diving headlong into an idiosyncratic and adventurous space.

Moving on from the simplicity of what made their first album appeal to so many and expanding on that template in an unexpected fashion, The Aerial Maps have virtually formed their own genre. Led by the vocals and lyrics of Adam Gibson with Simon Holmes and Sean Kennedy as the core creative nucleus, plus an array of musical guests such as Greg Perano (Hunters & Collectors) Alannah Russack (The Hummingbirds), Paul Andrews (Lazy Susan), the Aerial Maps have transformed from a band lauded for their fond folky take on life in Australia to a outfit exploring the darker reaches of the country's psyche, the often desperate lives lived beneath the hot sun and on the edges of the wide open roads through narrative and song.


'Positive Negative' is about a situation, where the switch is flicked and, fuelled by misinformation, something which one would assume as positive is read the wrong way, and a downward spiral ensues. Not every story has a happy ending, sometimes things are just bound to fail.


Other tracks by The Aerial Maps: The Sunset Park  -  Forgiveness
%