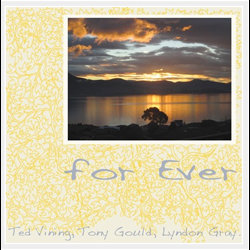 After a thoroughly enjoyable concert featuring the music of one of Alan's chief inspirations, John Lewis and the Modern Jazz Quartet, the audience demanded an encore. Alan and Derek stepped away from their instruments and gave the floor to Ted and Tony to close - in the true spirit of this music, and drawing from a musical empathy shared since the late '60s, they offered a stunning spontaneous improvisation to cap the night.
Enthused by this duo performance Ted saw where his next adventure lay. He approached Tony and suggested that they get together to record a series of such improvisations. Tony was equally enthusiastic and so began the first conversation that would lead to the musical conversations recorded on this disc - and to the creation of a new trio. Ted also invited the eminently versatile and adaptable South Australian bassist Lyndon Gray to partake in this adventure.
Ted's theme for the recording session was that they pay tribute to passed Australian jazz greats with a collection of spontaneous solo, duo and trio improvisations - or, as one of his dedicatees, the late artist-musician-composer-teacher-improviser David Tolley very aptly described, 'spontaneously performed interactive compositions'


3 piece improv - a tribute to the late great Roger Frampton