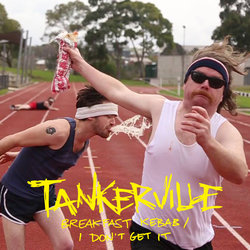 “They sound like a couple of sweaty Cyclops f**king!” -Rock & Roll Magazine

“Mind-blowing. These guys nailed it – raw, guttural vocals and plenty of chug propelled them through an immaculate set, leaving punters salivating for more.” - Beat Magazine

Tankerville features members of Graveyard Train, Cherrywood and Bodies, but they’re anything but a Country band. Fast, sweaty and reeking of last night’s mistakes, their songs cover all the big topics - kebabs, bar etiquette, lost blue tongue lizards and how building cranes are dismantled. Twin guitars, frantic drumming combined with manic screaming and most songs falling under the two minute mark has made them one of Melbourne’s most exciting new live bands.

Having only formed at a Karaoke night a few months ago, they’ve already toured SA with Batpiss and supported the likes of The Nation Blue, Adalita and Clowns.

Their first single, “Breakfast Kebab”, is a super quick, in your face tune that reflects on the appropriateness of eating rotisserie meat for breakfast - “Not the best idea I’ve ever had”. The accompanying clip was directed by Chris Matthews of Defero Productions (Batpiss, The Drones, Gold Class) and is a ridiculous relay race featuring kebabs and space travel.


A super fast, super brief tune lamenting the idea of eating a "Breakfast Kebab" and the effect it has on your guts.

Other tracks by Tankerville: I Don't Get It