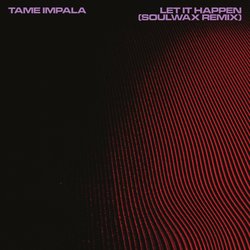 Tame Impala’s third album is titled Currents, where Parker addresses a blindingly colourful panorama of transition in the most audacious, adventurous fashion he’s yet to capture on record.

Dense with heady lyrical introspection, musically the most playful, bold and varied Tame Impala record to date, Currents is Parker putting down his weapons and embracing change as the only constant - sonically, thematically, and personally.

The first track from the record, Let It Happen, is a perfectly encapsulating preview of what lies ahead. The drums and Parker’s vocal introduction lull the listener with a sense of familiarity, until it all sweeps up into a cosmos once populated only by French robots, with insistent melody, broken machine loops, synthetic orchestration, surfing vocoder and a shredding guitar outro.