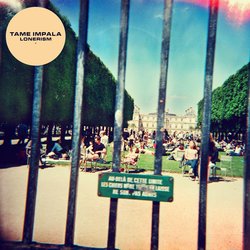 West Australian natives, Tame Impala, are Kevin Parker, Dominic Simper, Jay Watson, Nick Allbrook and the most recent addition, Julien Barbagello. They loosely formed in 2007 from a collection of Perth bands releasing their first EP in 2008, followed by the debut album Innerspeaker (2010) and the follow up, Lonerism (2012).
The 2010 release of Innerspeaker, with its irreverent, contemporary spin on assumedly dead and forgotten sounds, along with its unique approach to melody. Recorded and produced entirely by Kevin Parker, in what is essentially a treehouse with 180 degree views of the Indian Ocean, Innerspeaker was then engineered by Death In Vegas' Tim Holmes, with Dave Fridmann of Flaming Lips fame on mixing duties.
Following the Innerspeaker whirlwind, and some much needed respite for the band, Parker went back into writing mode with his trusty home recording setup, a portable set up at that, with the album being recorded around the world, most predominantly in Perth and Paris. Again, mixed by Dave Fridmann, the end result was Lonerism, gifted to their eager fans in October 2012.


Feels Like We Only Go Backwards is as close as Tame Impala will ever come to a top down cruising anthem, albeit one from a cracked reality and soaked in a deep, solo melancholy. #9 in Triple J's Hottest 100.

Other tracks by Tame Impala: Elephant