Takadimi - You Know, You Know 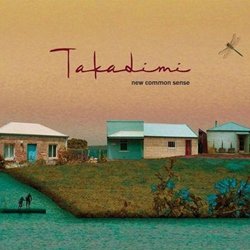 Emerging into the musical cosmos with their debut performance at the National Folk Festival, Canberra (’09), this world/jazz quintet created an immediate impression.

With a world of styles at their disposal, Takadimi find inspiration from the possibilities of a well integrated, multi-cultural society in Australia today.

In 2011 they launched their debut album New Common Sense which received some great reviews and gained widespread recognition across the ABC and community radio. They also received a 3.5 star review from national newspaper, The Australian.

Since the album release they have played at a wide variety of venues and festivals throughout NSW including a live to air for Eastside Radio at Venue 505, the Occupy Sydney Anniversary in Martin Place and progressive folk festival ‘Frogfest’ headlined by the Barons of Tang.

In June they will be performing at the Melbourne International Jazz Festival.

‘Jazz, folk, Irish, gypsy, Latin and Afro vibes are all fused delicately but precisely to create an eclectic mix that somehow blend magnificently into a cohesive new sound’. East Side Radio, 89.7FM


A friend once described our sound as 'World-Emo'.

This tune, though coming more from the jazz-end of things, could be said to have inspired that comment.

Embodying the struggle and pain of domestic violence:
'You know that you know it is no good - so get out of it'.


Other tracks by Takadimi: Into The Night  -  Therese