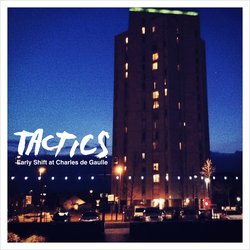 Tactics were a post-punk group which formed in Canberra in 1977. The line-up changed periodically, with songwriter and vocalist, David Studdert, as the mainstay. They released four studio albums, My Houdini (December 1980), Glebe (November 1981), Blue and White Future Whale (1986) and The Great Gusto (1990).

Tactics were one of the most celebrated acts on Australia's new wave scene during the 1970s and '80s, boasting an eclectic sound that ranged from angular pop and stripped-down psychedelia to fractured art rock, all married to the thoughtful provocative lyrics of Studdert, the group's motivation was to create a popular music native to an australian being-ness.

The band have released a new album in 2019 ‘The Early Shift at Charles de Gaulle’.