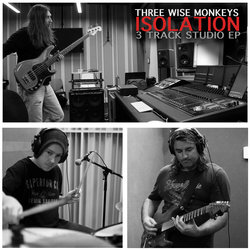 The group started performing at local Jam Night's around Sydney in 2010. Normally doing 3 songs in a 15 minute set, 3WM quickly gained a reputation of dynamic performances and great musicianship. The Monkey's quickly transitioned onto the local indy circuit, doing support sets for more established bands, finally culminating in the opportunity to start putting on headline shows and being invited to play at festivals, highlighted by 3WM opening the 2013 PROGFEST,

In 2015 the Monkeys were invited to headline the Vision Festival in Adelaide, and returned to Adelaide the following year for 4 performances for the Guitars in Bars Festival. On the way back they did a regional Victorian tour which saw them perform in Bendigo, Traralgon and Warrnambool, on perform on the Live @ Spectrum TV show on Arena and Channel 31.

Now in there 10th year, the Monkeys are releasing their ISOLATION EP recorded at UWS studios at 196kHz. The band set up in isolation booths and recorded live in the studio. In 2020, the Monkeys will return to the stage.


Durka Durka starts with a slow chordal intro, fleshing out the major 6th and 9th over a cadence where the fundamental time signature keeps evolving. Transitioning into an uptempo riff, before cascading down to a solitary bass rumble. The band builds again under a waterfall of guitar descending lines, to end in a punk infused version of the original theme.