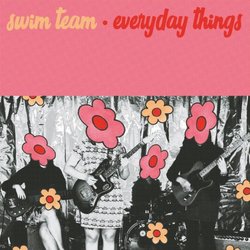 Swim Team started life in a Brunswick lounge room in late 2014 with no doubt after a few wines - who can remember back that far? Along with fellow friends and first time musicians TJ Day (drums) and Esther Sandler (bass).

A couple of years later the band had an EP, a split single with bffs Lazertits, a full-page feature in Frankie Mag, national shows, a jaunt to NZ and numerous international support slots under their belt. They said sad goodbyes to Esther, played for a year/wrote an album with with Camila (Maureen), and have a recently recruited Jill (Shania Choir) on bass. It’s been quite the ride.

Musically Swim Team take inspiration from 60s girls groups, from lo-fi indie pop to ramshackle garage and anything soaked in reverb. Slowly but surely, the band has been refining their sound, incorporating nuances into the neatly packaged pop songs defined by group vocals, harmonies and jangly dueling guitars.

Life changes, and so do band members, but Sammy, TJ and Krystal continue to be pals, talk about their ageing cats excessively, make music together and welcome new friends along the way to join the fold.


Everyday Things is a tongue in cheek tune about everybody's first world problems, a 2 minute moan and groan about all the little annoying things that make up the daily grind.