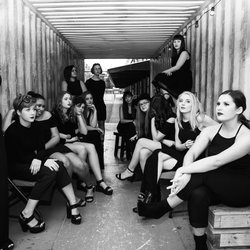 The 30 piece, all girl soul band exude explosive energy with their refreshing take of classic Motown soul and blues. Beyond writing and recording original music, the high-school aged group showcase expert musicianship, tour nationally, internationally and even star in documentary TV series ‘Heart & Soul’ on ABC. Season 2 of ‘Heart & Soul’ followed the girls through the ups and downs of tour life across North America, and was capped with the release of a live soundtrack recorded at notable performances across Europe.

Sweethearts are backing the success of ‘Heart & Soul’ with an original EP Four Leaf Clover released on 12 August 2016. The girls embark on a coinciding tour of Melbourne, Regional Victoria and Adelaide.

Likened to Melbourne’s Saskwatch and Clairy Browne and the Banging Rackettes, Sweethearts have global recognition from extensive touring, their explosive sets are a culmination of pizazz from fresh young talent and incredible skill.

The Sweethearts list of achievements has grown significantly in the past 5 years as the girls release original music. Their debut EP received nomination for The Age/Music Victoria Best Soul, Funk R’n’B and Gospel Album in 2013.


The first track and single JMF sets the tone for listeners, grabbing with an inescapable funky bass
groove that gets feet tapping and blood pumping. The driving bass is followed by 80's disco
inspired synth, tight horn lines that quickly morph the track into a classic big band hit.


Other tracks by Sweethearts: Peddington
%