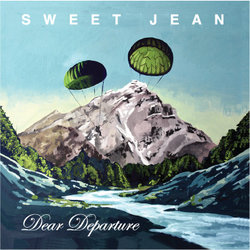 Sweet Jean is Sime Nugent and Alice Keath. Their music is lush, melodic, honest, and full of charm. Since forming in late 2010, Sweet Jean have built a reputation for their evocative songwriting, razor-sharp harmonies, and stirring live performances.

As the AU Review put it, Sweet Jean “can break your heart one minute and mend it the next. The duo has a natural ability to transport their audience to the heart of their songs.”

Sweet Jean’s debut album Dear Departure will be released on July 4 2013. Co-produced with John Castle (Washington, Bamboos, The Drones, Vance Joy), the album is a collection of stories and reflections by Sime and Alice about life, longing, misadventure and mortality.

“Two distinct voices and strong songwriters make a combination greater than the sum of the parts. Dreamy, epic, wry, tender, straight-shooting. This record deserves to be heard far and wide.” Paul Kelly.


The sunniest song you’ll ever hear about losing it all, “Rise & Fall” is a melodic and mordant song about stubborn optimism against the odds. Recorded with John Castle (Bamboos, The Drones, Washington), Sweet Jean’s debut album “Dear Departure” will be released on July 4 2013.