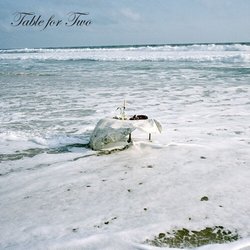 It has been a long two years since the release of A Toast to Superstar, the debut long-player from a much loved Melbourne
duo known as, well, Superstar.

From this extended period, we have but a handful of releases to judge them on. It seems that the band, made up of Kieran Hegarty (guitar, drum machines) and
Esther Edquist (keys, vocal) prefer to stay in the shadows. They are concerned only with their artistic output, and in ensuring that this is of the highest quality.

Their second album, Table for Two, doesn’t disappoint. Taking elements
explored in their first record, the band build upon their unique sound. Edquist takes the vocal sound on this record to a new level, showcasing an incredible capacity that was previously masked beneath Hegarty’s dominant guitar work.

The record is a great achievement, taking everything we loved about their first
appearance and pushing the envelope to a new dimension. The band are reaching for a new sound previously unexplored amongst their contemporaries, and are hitting the mark, too.


"The Long Frond" is the second single from Superstar's sophomore LP, 'Table for Two'. Met with a myriad of acclaim The Long Frond is a "slow burning spacious beast of a song that signals exciting things to come."

Other tracks by Superstar: Folding Gold  -  Slice of Paradise
%