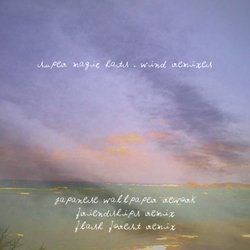 Melbourne-based beat-maker and producer, Super Magic Hats is a musician whose work embraces melody, noise and experimentation. He emerged on the Melbourne scene in mid-2011, receiving national airplay and a slew of fast-forming fans.

‘Wind’ was released in late 2012 and is the first single to be taken from Super Magic Hats’ self-titled debut EP, set to be released independently this March. The song is built around tropical samples and a glitched-up vocal snippet and has already taken the #1 position on the AMRAP AirIt charts across community radio nationwide.

Super Magic Hats has played extensively in his hometown Melbourne, most recently to a sold out Northcote Social Club supporting Sydney indie-electro act RUFUS and has also begun touring nationally with a diverse range of artists including Shigeto (Ghostly International).


The ‘Wind Remixes’ sees Super Magic Hats bringing some of his fellow beat-makers together to produce their own interpretations of the track. Remixes come from 15-year-old Japanese Wallpaper, rising star of the Melbourne beats scene Flash Forest and buzz-band Friendships, whose offering results in a dark and deliciously twisted rework.