Sunset Blush - Purple On The Inside 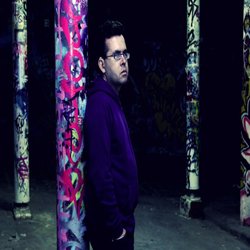 Originally from Queensland, Sunset Blush has been writing, recording, performing since late 90s then moving to Melb in 2005. Along the way he gained some valuable career support from Austrian ‘Godfather of Bass’ Al Slavik and in 2007 he won 2nd place in the indie-rock category in the Pacific Song Competition.

In October 2011 he released the album ‘Purpledomination’ which gathered airplay support from regional radio. A track from the album, ‘I Think it’s Time’ was featured on the ‘Sounds Of Melbourne’ compilation. He has recently supported Melbourne comedy-legend Oliver Clark for his album launch at Howler in Brunswick.

Blush has also just embarked on a series of shows for the latest single "Sweet Barbwire". Catch him at The Exeter in Adelaide on Dec 11 and at Yah Yahs in Melbourne on Jan 16.


An eclectic and unusual tune from Melbourne’s alternative underground band, ‘Sunset Blush’. Featuring electric violin, guitar and a great video clip this tune has already found a home at some left of centre radio programming and on the latest issue of SoundsLikeCafe.