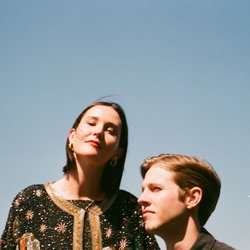 The idea for Sunbather hatched late at night after a party while Sally and Mike were poorly dancing to a slow shoegaze playlist in their West End sharehouse. Mike had recently moved in and the pair were realising how similar their taste in music was, even down to the bands they loved growing up. Sally had played in projects as a bass player and backing vocalist before, but never had been a dedicated vocalist. Mike had also in the past mainly been a bassist, but wanted to play more guitar. They decided to try writing music together in a converted basement studio in their house (a windowless concrete box whose main redeeming feature was soundproofing) that Sally had previously set up. The idea was to encourage each other in singing and guitar-playing respectively, out of both of their comfort zones. They also decided to stick to strict parameters, using only guitars for texture, and experimenting with tones and layers to create their sound.


Inspired by the painting 'Twilight Conversation' by Ron Hicks, the song explores the small details that make up a life shared, and a reflection on the need to be gentle with and pay attention to one another.