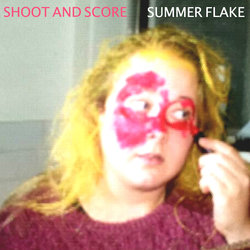 Drenched in a timelessness of reverb, Summer Flake's songs are transcendent - moving through the dreamy wings of pop, via The Crystals and The Paris Sisters, down the lonely byways of Karen Dalton and Laurel Canyon folkies, ambling up into the grubby 90s of Hole and Sonic Youth, before lingering out finally into the sunshine of other dream-pop contemporaries like Best Coast or Mac Demarco.

Crase's output has been prolific over the last four years, with three EPs under her belt that garnered increasing attention in Australia and internationally. In August 2015, Henry Rollins premiered "The Sun Won't Shine" (the debut single from the Time Rolls By EP) on legendary Californian public radio station KCRW, with Rollins proclaiming "we love this band".

2016's Hello Friends continues Crase's tendency for the thoughtful arrangements, '90s-tinged frankness and dizzying harmonies that have led her from strength to strength, this time adding a deeper layer of emotional reflection to an already enduring sound.

These songs, as delicate as a snowflake on a summer beach, succeed in unmooring one from the drudgeries of place and time. This new release secures Summer Flake as a band to watch.


Drenched in a timelessness of reverb, ’Shoot And Score’ enlists winding and mesmerising guitars underscoring straight-shooting lyrics as she moves through the dreamy wings of pop and the grubbiness of grunge.


Other tracks by Summer Flake: Wine Won't Wash Away  -  Make Your Way Back to Me
%