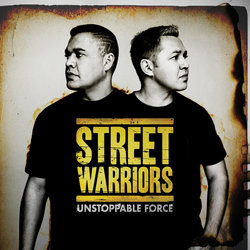 Street Warriors (brothers Abie and Warwick Wright - aka Predator and Wok) are familiar faces on the Australian hip hop scene and well respected pioneers of Indigenous hip hop - an amazing achievement given that they are only just now launching their debut album, “Unstoppable Force.”

“Unstoppable Force” bursts from the speakers with the first track, ‘Firestorm’, providing a mission statement about who the Street Warriors are: ‘step by step you do it, town by town you show it’…this album is the culmination of seven years of hard work and showcases the Street Warriors’ unique energy, realness and ability to still say what they want.

The album highlights the group’s versatility with a soundscape ranging from deep beats and tribal energy ramping from the speakers through to street raps and soulful RnB collaborations with the likes of #1 NZ band Nesian Mystik.

Anthony ‘the Man’ Mundine makes a guest appearance on “I Rep for My Mob” which has the hallmarks of a new indigenous anthem and there’s a definite Newie rock edge in tracks like Summertime and Solid Rock, which features the vocal of Australian Idol alumni Shannon Noll.


The opening track from "Unstoppable Force" highlights why Street Warriors are among this country's most powerful hip hop outfits.

Other tracks by Street Warriors: Solid Rock  -  I Rep For My Mob
%