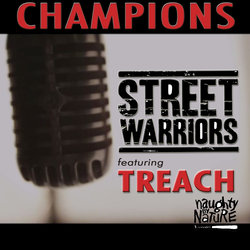 “With their electric live energy, the Street Warriors tout original lyrics that empower and foster respect, social conscience and plant seeds of hope and change. They are great ambassadors and mentors for future generations.” (Di Mills, Woodford and Dreaming Festival organiser)

Street Warriors (brothers Abie and Warrick Wright – aka Predator and Wok) are well respected pioneers of Indigenous hip hop who have built a loyal following around Australia on the back of their energy filled live shows, poignant lyrics and their positive lifestyle messages culminating in Deadly Award winning nominations and performances.

The Street Warriors have rocked local and international crowds in excess of 10,000 including numerous major festivals, regular NAIDOC dates and community hip hop youth workshops around the country, as well as support to major artists such as 50 Cent and G Unit.

Their debut album ‘Unstoppable Force’ features the reworking of the classic Goanna hit, Solid Rock where the boys combine classic Aussie rock with their Deadly hip hop. Leading music writer Kathy McCabe called it ‘An anthem for our times’.

They recently teamed up with the legendary Treach from Naughty by Nature for their latest single, Champions feat. Treach.

“Naughty by Nature had always been a favourite group of ours and when the opportunity came to collaborate on this track we jumped at it,” says Wok.