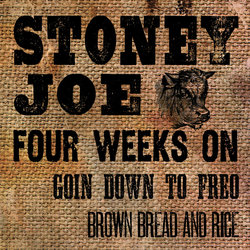 Stoney Joe's country music is inspired by the great expanses of Western Australia and beyond, with local landmarks a regular feature in Stoney Joe's country universe. Blackwood River, Kalamunda Hills, I Want a City and Goin' Down to Freo; all examples of songs that speak about WA from a perspective rarely approached by West Australian artists.

Stoney Joe bring something fresh to the country music genre and tip their hats to the past. Echoes of Chet Atkins, Woody Guthrie and Townes van Zandt mingle with sub-bass grooves and electronic beat treatments. The result of a different approach... modern country music full of contrast and neo-natural elements.


The current single Four Weeks On is a musing on the fly in-fly out culture of the North West. It precedes Stoney Joe's debut album due later in 2011.

Other tracks by Stoney Joe: Goin' Down to Freo  -  Brown Bread and Rice
%