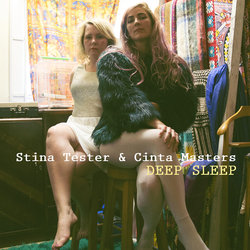 After a few years off the live scene, Stina Tester and Cinta Masters have reformed as a duo to release their debut album. Deep Sleep is the first release from the band since their promising 2009 Gold Tango EP.

Deep Sleep is made up by throbbing bass lines, haunting vocals and a synth solo, inspired by 1970s and ’80s goth, post‐punk, synth‐pop and artists such as Delta 5, Pylon and Depeche Mode.

Stina and Cinta’s music delivers both upbeat pop and a darker mystery. It will catch you off guard with its unconventional, hard-hitting drums mixed with hypnotising harmonies, electronic flourishes and tightly synchronised keys.


Deep Sleep is made up by unsettling, throbbing bass lines, strong & soaring vocal harmonies and an epic synth solo, inspired by 1970s and ’80s goth, post‐punk, synth‐pop and artists such as Delta 5, Pylon and Depeche Mode.