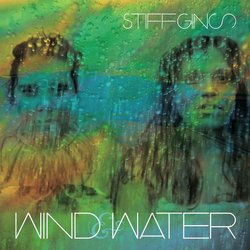 On the verge of their third album release, Stiff Gins Nardi Simpson and Kaleena Briggs have much to celebrate. Eleven years ago, their moniker was reclamation of an offensive reference to Aboriginal women, a banner to guide their music in the direction of strength and pride. each of the eleven tracks on Wind & Water capture moments and turning points in the women’s lives. Their trademark harmonies still shine, but they’re met with sophistication in their songwriting that can only be found after a decade of making music together. They have travelled the world, received prestigious awards, and created a loyal fan base with their heartfelt songs and emotive performances. They’ve performed in the Middle East and remote communities across Australia, and developed a musical friendship that has transformed them both. Now, with their new album Wind & Water, they have perfected a sound that honours the raw power of their voices and their history while leading them firmly into the future of Australian music.
‘Wind & Water knew what it was long before we did,’ says Nardi, ‘it was just waiting for us to catch up! ’ Kaleena Briggs


Yandool, a radiant welcome sung in the traditional language of Kaleena’s people (Wiradjuri and Yorta Yorta)