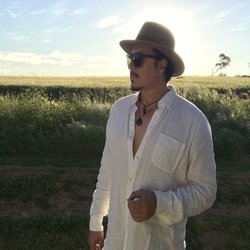 After touring with legendary band Sovereign and with a hunger and burning passion to succeed, it was a natural progression for Steve to become a solo artist in his own right.

In 2007 he collaborated with Reggie Bowman of Southern Sons and the iconic Ross Wilson on his own debut solo record, “The Battler”.

On the back of this release he cemented his place in Australian music as one our most authentic roots singer/songwriters.
Hits included Girls On Horses and The Battler

More albums and a string of hits followed including “Echuca Sun”, “The Long Way Here” and the wildly popular duet of his song “Love It When It Rocks”.
​
In 2015, Steve Eales unleashed the album, “The Open Road”, featuring his newly coined band of the same name.

2019 He released "Better" as a collaboration with Reggie.

Always diverse, forever the storyteller – Steve Eales is back to delight you once again with a new sound and fresh new stories like "THE NAKED COWBOY" from which you'll get a feel for his creative genius as award winning songwriter and multi-instrumentalist


A classic story describing a hot day under the Australian sun, a tempting cool river and an opportunity too good to miss out on. Our hero should be on the look out for passing tourists though.