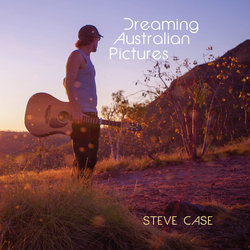 Steve Case was a little shocked and bemused when, after rocking the house at one of the nation’s biggest and best known Country Music Festivals, the feedback he received from organisers was simply “Your jeans aren’t country enough”.
At blues festivals he wasn’t bluesy enough, at folk festivals not quite folky enough and so after years of trying to fit in, Case changed tact, quit his 9 to 5 job, bought a van and began life as a travelling troubadour - playing his songs, his way to his kinda people.
This travelling eventually landed him up in the Kimberley - one of the most beautiful and remote parts of Australia. And it is little wonder that after years of not knowing where he belonged or fitted in, he found his home amongst the red dirt and salt of the earth characters in the Australian outback.
Case is no pretender - his honesty coupled with an easy going and engaging stage persona has endeared him to audiences throughout the country. He is in his element playing to fellow travellers, grey nomads, tourists and vagabonds with songs that are true to his personal experiences yet widely relatable.


Based on a tour guide and good mate from the Kimberley, it’s also an amalgam of the blokey blokes you come across in outback Australia.
The type of blokes who seduce their women with a six pack of beer and offer to do the “crocodile rock” until the morning comes.