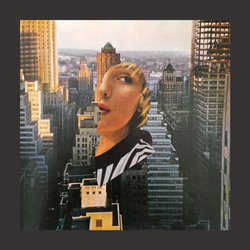 At the beginning of 2017 Stella Donnelly released her debut EP ‘Thrush Metal’ and was met with critical acclaim. The five-track release was written over the space of two years; a musical undertaking resulting in a bold and unapologetic repertoire of songs which has forged Donnelly to the forefront of the new guard of Australian songwriters. Donnelly’s brutally honest and witty observations of people and relationships are transformed into blissful poems and lyrical punch lines on her standout debut EP ‘Thrush Metal’. Donnelly’s relatable way of writing is her lens to the world in which we live, a glimpse into what it’s like to be a millennial woman in the age of Trump, Tinder and third wave feminism.

Split Singles Club was originally created by Milk! & Bedroom Suck Records in 2017 with the simple aim of bringing together and documenting the community of musicians & creativity that surrounds them every day. The torch has now been passed along to Poison City Records, and Our Golden Friend who have lovingly curated the eagerly awaited 2018 instalment of Split Singles Club. All cover artwork is a series of original collages by renowned artist Stephen Tierney. Grab your subscription from splitsingles.club.


Talking highlights Donnelly's incredible skill of stripped-back songwriting. Her brutally honest, witty observations of people and relationships are transformed into blissful poems and lyrical punch lines and her relatable is a glimpse into what it’s like being a millennial woman in the age of Trump, Tinder and third wave feminism.